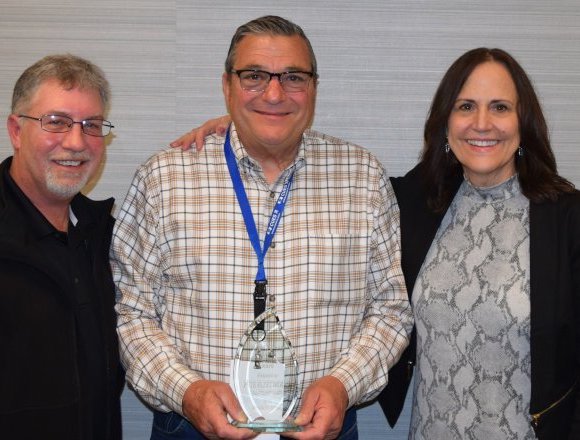 On 2-22-22 at 2:22.22 p.m., the NASSCO Infiltration Control Grouting Committee (ICGC) announced the inception of the Harold Kosova Lifetime Achievement Award at the ICGC meeting held in Indianapolis, during the WWETT Show.

“Known as the ‘original trenchless technology’, the process of sealing a sewer system using a chemical grout has been developed and advanced by nameless people,” said ICGC chairman John Manijak, while announcing the award. “It is in the spirit of respect and acknowledgment that we, here today, begin to recognize and acknowledge those who came before us. The efforts that they have put forth shall not be forgotten.”

Kosova began his career in the sewer industry in March 1960. He trained in the field during the daytime and in the evenings worked on building the first sewer camera and CCTV studio. In 1962, he worked side-by-side in Cottonwood Falls, Kansas with Ken Guthrie (Penetryn Systems, now CUES) to develop the first combined grouting packer and CCTV system. This was the first time that acrylamide grout was injected through open joints within a sewer system. The grout then gelled, creating a seal on the exterior of the pipe and stopped the active infiltration. Shortly afterward, Kosova began building grout rigs for the company that he would eventually become president of – Video Pipe Grouting.

In 1973, Kosova headed the Huntington, West Virginia Army Corps of Engineers 66” Sewer Sealing project, which required the use of Fly Ash combined with grout to stop infiltration along a river. Joining the Grouting Task Force in 1976, he worked to secure a reliable, ideal replacement for AM-9 chemical grout.

In 1982, he received a call from an east coast municipality about the need to seal laterals. Working again with Guthrie, they swapped ideas about the design of a packer that had the capability to launch a sock for sealing laterals pipes.

In 1985, Kosova became president of National Power Rodding (Chicago) and began redesigning the grout rig layouts. He retired in 2015.

Fleetwood began his career in the sewer industry in January 1971 working for Video Pipe Grouting in Exton, Pennsylvania. Starting out as a laborer, Fleetwood worked as a grouter for seven years. He returned to the industry in 1980 to work for Video Industrial Services in Birmingham, Alabama. After five years, Fleetwood moved to California to work for National Plant Services. After Carylon Corp. purchased Bio-nomic in 1990, he moved to North Carolina to run the new company. In 1999, Fleetwood began grouting service work with the west coast company and was instrumental in the development of Logiball’s Longitudinal Packer. Developed to seal pipe fractures, Bio-nomic was the first company to try the new design in Sullivan’s Island, South Carolina.

Fleetwood led the construction and development of the grouting test cell in 2016 – a unit that allowed for a full-size reconstruction of a sewer trench and pipe installation using various bedding medium.

The data that was gathered from the study of the grout formations using the test cell led to the release of 2 new NASSCO/ICGC Grouting Specifications released in October 2021. Fleetwood was involved in the writing of these Specifications, the upcoming ICGC white paper, and the Grouting Inspector Certification Course (a future NASSCO training program).

“Over the past 66 years, chemical grouting for the control of infiltration in sewer systems has endured and has become a staple in the toolbox of sewer rehabilitation,” says Manijak. “Members of ICGC have contributed significant time, knowledge and resources to build awareness of grouting and to serve our entire industry. The two new ICGC Grouting Specifications released in October 2021 cover Grouting for Pre-Rehabilitation and Grouting for Capital Grouting. An informational video on the many benefits and features of grouting technology was released in 2021. ICGC has just completed the Unified Safe Operating Practices Program (USOPP) which will be taught at all major grout schools, and an online test and certification from NASSCO will be available in the coming months. The Committee has also completed the review of the Test Cell Findings – a study of grout formations in sewer trenches when utilizing various gel times and backfill mediums. A comprehensive whitepaper and video series are planned to be released in 2022. Without the many contributions of people like Harold Kosova and Pete Fleetwood, these many achievements would not be possible.”

Back to News & Events